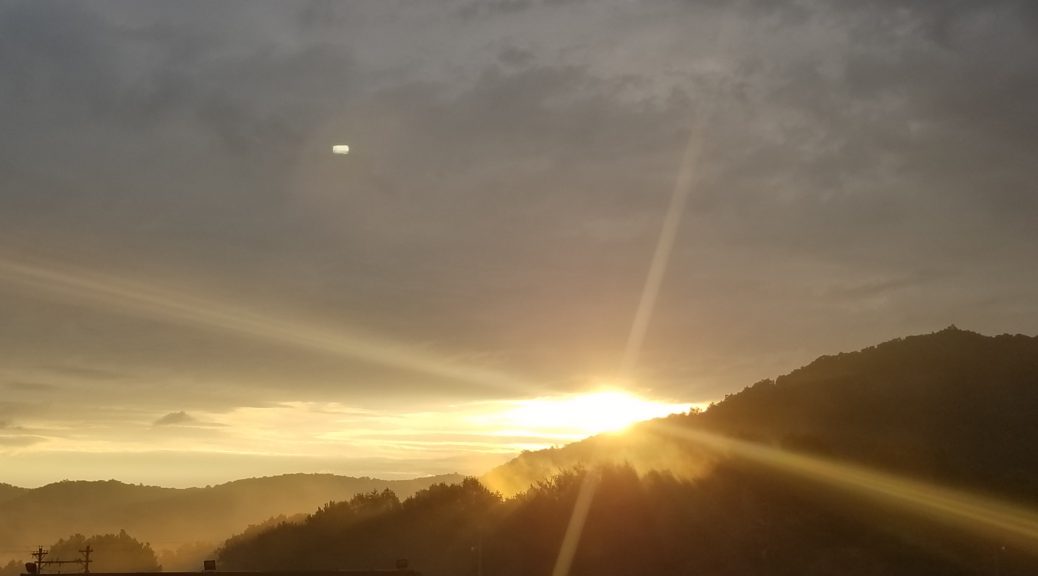 “So, where is everyone from today?”

Simple enough question, really, isn’t it? Except it’s not, since every answer seems to have additional meaning today; everything has a context we can acknowledge or not.

“Connecticut,” my son said, and it felt like every other set of eyes in the tour group turned. All the previous answers had been local counties or small towns I’d never heard of.

We were on a compact college campus in rural Appalachia, a gorgeous region of deep valleys, lush forest, and streams and lakes at every turn. The night before, we’d fallen in love with the nature while exploring, ate some great BBQ on a picnic table at a roadside place where the Allman Brothers was cranked up all the way, wood smoke filled the air, and the parking lot was full of trucks and locals of all colors, shapes, and ages.

Now, as the tour started, anybody who wondered if they’d heard us correctly was reassured they had when I asked questions of the tour guides. The accent gave us away.

Another father, a few years older than I am, started the conversation as we walked, letting our kids take the lead in the group.

“Did your son say Connecticut?”
“He did.”
“What brings you here?”

Another good question that should be simple. There was a big, philosophical answer and a specific answer, and we talked a bit about both. The campus wasn’t exactly close for him, either–they’d driven several hours to get there–but we both shared a sense of pride that our next generation was thinking about it. He said the university was kind of viewed as a “city on the hill” where he lived.

His daughter, clearly his treasure, would be the first in their family to go to college. He marveled at her smarts and assured me it hadn’t come from him.

Mine would possibly be getting away from home in a bold way that neither of his parents had, if he went there.

Both with so much potential.

He said he’d never been anywhere near Connecticut, although his daughter had once been to Delaware on a trip with her sports team. He wondered what it was like, if his misconceptions were similar to what I likely had of Appalachia.

“We’re not toothless hicks, you know,” he said out of the blue, and I immediately was worried I’d alluded that I’d thought so. I told him literally everyone we’d met to date had been fantastic: friendly, polite, warm. He seemed happy to hear that. I asked him what he pictured Connecticut to be like.

I told him he was partly right; there was a lot of that, but a lot of suburbia and city, too.

“I’d hope that if I visited Connecticut, people would be as friendly as you have seen down here.”

I lied. Sometimes you have to.

We talked about work, life, the costs of higher education, the risks of debt and the value of degrees. We didn’t talk about things in the same way; a lot more references to God in his words, a lot more snark in mine. We both had pride in ourselves. He was a self-identified “mountain man” and wore it on his sleeve. We had some similar hobbies and interests. As we walked, two very different Americans became more familiar.

Somewhat effortlessly, and in between campus tour stops–here, a dorm room, there, a student center–we talked about what was going on in our country, our states, our communities. The scourge of addiction in our community. Division and distrust in our country. Good BBQ. The big stuff. We both agreed that things were more complicated, and not in a good way, for our kids. He said he was raised to be “his brother’s keeper” and we both agreed on that, for sure, even if the meaning of it varied. We both thought the Golden Rule was pretty important.

It started to rain and then downpour. I hate umbrellas and like rain, so I’d just brought along some rain gear. My son had an even better rain jacket on. The father pulled out an umbrella for his daughter and took care of her, then went over and made sure my son was covered, sharing his own umbrella. We thanked him.

We shook hands at the end of the tour and wished each others’ kids well. I have little doubt she’ll be fine. She’s already got so much going for her that so many others don’t.

So, where is everyone from today?

Some different places, for sure, where we can learn something new about each other. But I’d like to think and hope some common ones, too, where we all strive for a better tomorrow for our kids and everyone else’s. The paths to that better tomorrow vary, and that’s the root of so much disagreement, which isn’t dangerous by itself. What’s dangerous is the fear of reaching out to each other, trying to understand what brings us here.